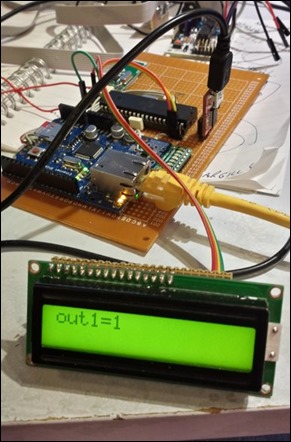 Just a quick update on the home control… the slaves are about as good as they can get – I’ve added memory for the state of the 3 PWM outputs and ALLOFF and ALLON commands so that one can set the brilliance of, say a 3-colour LED strip – and then turn the lights on and off accordingly. At some point I’ll put a global fader on all 3 colours….

I’ve switched my attention now to the master board. I was using a MEGA, having long since given up on the 328 due to constantly running out of memory. I had a few 1284p chips lying around – in case you don’t know these are the largest Arduino-type chips you can get in DIP format – 40 pins – and they have one great feature – 16K of RAM which means you can forget about penny-pinching RAM.  Accordingly – I’ve added SD logging – and just now for the sake of it, an LCD display. I’m using the new LCD library that lets you use an LCD module with a 74HC595 shift register on the back (on veroboard) to reduce the pins needed to talk to the processor down to 2 (clock and data).

As you can see above, the LCD is echoing the Ethernet commands as they come in (and quickly too) and over on the left is the micro-SD card plugged into the Ethernet card…. which is also supplying the 3v3 to the radio board. All in all very few components – took me an hour or so to put this lot together and twice as long to remember how to use the various libraries.

All working well, not sure if there’s a REAL use for the LCD – I also have a 4-line version of that… overall current for the board is around 300ma – or 1.3 watts – that won’t break the bank running all the time and it should run off a standard USB plug-in-the-wall.

The next challenge is a box.  I have to say, it’s all working very well – once again for pinouts etc I keep referring back to ManicBug’s various articles.